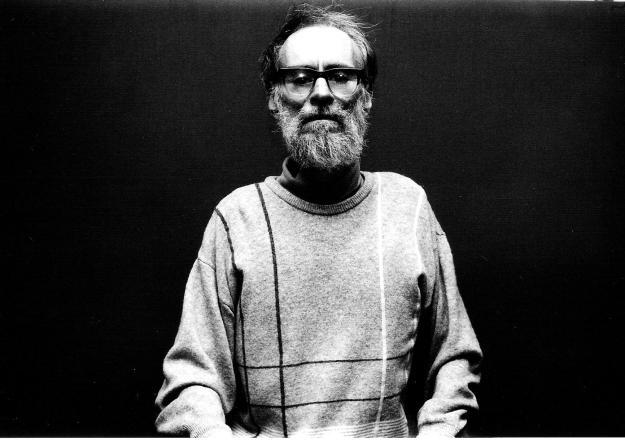 The following four-page article was printed in GMCDP’s Coalition magazine in July 2009 as an appreciation of his life.

Also, in 2004 Ken Lumb was interviewed by Tony Baldwinson for a research project on disabled people, politics and imagery. Ken had seen a draft copy of the research report and provided his comments…

A disabled man, Ken Lumb was the editor of Coalition, the journal of the Greater Manchester Coalition of Disabled People, and wrote some of its key articles. He took an interest in visual representation, and produced works in oil paint on board and in mixed media on board. He was a member of the local branch of the Disabled Drivers Association. Ken Lumb was centrally involved in campaigns in Rochdale, England, to alter the pedestrianisation of the town centre which excluded disabled people who needed their cars to be mobile. Also in Rochdale, he was instrumental in the development of the first house to be adapted with public funds to meet the needs of disabled residents.

Ken Lumb can be seen as a classic and widely respected example of Gramsci’s archetype of an organic intellectual, corresponding with and respected by key disability scholars such as Ken Davies and Vic Finkelstein, unemployed and living in a working class English town somewhat away from the metropolitan centres, yet writing and organising with a national influence with a ‘path’ that is sometimes detectable by others only in hindsight.

Ken Lumb saw the historical background to this research on imagery as linked to the interest of Vic Finkelstein in what may have been a legal association of beggars in the nineteenth century, which was said to have a concern about differentiating impostors and mendicants from real beggars. According to Lumb, from references in Berthold Brecht’s Threepenny Opera and Mac the Knife it is possible to suggest that there was one or more organisations supplying impostor beggars with emaciated dogs, and fake Army uniforms following the Boer War. He added that there are also suggestions from informal studies by Anne Plumb (Ken Lumb’s wife) that lunatics had registered a Friendly Society to campaign for legislation.

Ken Lumb understood the potential of and therefore made full use of good communications: verbal, written and visual; especially when the content had an authenticity which accorded with the life experiences of other disabled people and when it could reach other disabled people without being mediated by other interests or professions. He understood the power of alliances with supportive professionals and built networks where he judged that the agenda for change was not going to be compromised.

He saw links between this research and the images of Duchane and photographs of people in mental distress being given electric shocks to the head. He stressed that there are contradictions which need to be remembered: with the example that around 1912 a Bill for the sterilisation of some disabled people was going through Parliament, with the support of Winston Churchill and of the National League for the Blind and Disabled, but with opposition from the Townswomen’s Guild and others. He noted that education for disabled children was integrated in Scotland in the 1930s, many years before this approach was taken up in England.

He recalled seeing a strong photograph of open-top trikes (one-person, three-wheeled, very small cars) at a rally in Hyde Park, London, which took place in the 1930s organised by the Disabled Drivers Association. He saw organisations such as the Disabled Drivers Association as a key common factor in the political development of a number of key activist disabled people such as Bert Massie, Anne Rae, Joe Hennessey and John Van Dongen.  There was a rival organisation at the time, the Disabled Drivers Motor Club which was seen as more radical and ‘a breakaway organisation’ and Kevin Hyett was one of the disabled activists who developed within this organisation. They took on innovative models of self-organisation, for example with an early phone line of volunteers offering advice on Motorbility, a Government grant given to disabled people to lease adapted cars to drive independently.

In terms of the British Polio Fellowship, it was quite decentralised with many local groups doing ‘other things’ to the national organisation, according to Lumb. The Fellowship was different to the big charities in that it followed a social agenda, but was not political. It was also different to some of the local charities such as the Cripples Help Society: which Ken Lumb contended was initially formed to help donkeys; St John’s Ambulance and the Red Cross, which together organised out of season holidays for disabled people at English holiday camps such as Butlins. There were no adapted coaches, and volunteers just carried young disabled people, including Ken Lumb, over their shoulder up the coach steps. The first coach with a wheelchair lift in Rochdale was in the early 1960s and was featured in the local newspaper.

The journal of the Disabled Drivers Association, Magic Carpet, which contained photographs from the 1950s onwards, was important in helping disabled people organise around issues and campaigns. One of the earliest access groups run by disabled people was in Norwich, England, and its work was promoted to groups in other areas, as well as covering issues such as accessible housing.

Ken Lumb considered that Ways of Seeing by John Berger was very useful for him in how he considered photographs as well as for his painting. For influences in cultural theory Ken cited Walter Benjamin, Thomas Adonimo and Hocheymer. He also was influenced by the work of Judith Williamson and Stuart Hall at the Centre for Contemporary Cultural Studies (Birmingham, England) on feminism and advertising in the 1970s, and the writing of Chantel Mouffe on Gramsci. He recalled that issue 29 of the journal Ten8 looked at disability and photography, possibly linked to an exhibition but without any author details included. It opened with a quote by Dostoevsky. From later research it seems that Ten8 was published quarterly in two phases: 36 issues from February 1979 to Spring 1990, then three further issues from Spring 1991 to Spring 1992.

The research on disabled people imagery was not intended to fully assess the remarkable contribution that Ken Lumb made to the wider Disabled People’s Movement in Britain. But it did show in the qualities and attributes of one person the broader points of the research around disabled people’s self-organisation, autonomy and political growth which predates what may be called the current political era.